It’s not hard to see why Florence is a fav destination for many. The place is romantic, filled with history and culture, and also serves up some of Italy’s best food. But you can all too easily fall into the trap of overspending on sub-standard fare if you stick to the haunts around the Piazza del Duomo. Instead, join the locals here:

Florence offers an abundance of deliciousness.

Only open for lunch, this small restaurant offers mouth-watering and satisfying meals that’ll have you salivating for days. Arrive at 11.45am so you can get a table and peruse the menu outside. You can practice your patchy Italian here but all you pretty much need to know is that you’ll get the ravioli and ribollita for starters. And then choose your meat options for the main – a large, juicy, salt-and-butter crusted pork chop, or if you dare, share the city’s famed T-bone steak between two. Order a side, throw in a glass of Chianti for a few euros and that’s your breakfast, lunch and dinner sorted.

Florence’s answer to Subway but about 10 times better. Be prepared for a fast-moving line and know what you want. Choose from the list, or create your own such as prosciutto, sheep’s cheese, eggplant, tomato and tapenade. Squished between slides of warm crusty focaccia bread, these 5 Euro babies will keep you full for hours. Best eaten with a bottle of Chianti poured into plastic cups sitting in the gutter – or for somewhere more classy, take away down to the River Arno.

You really could eat every meal here. From 10am start the day with an espresso and a sweet flaky (and cheap!) Italian pastry. Then buy the makings of a picnic lunch – but be warned it may take you a few hours to peruse all the cheese on offer. Add some prosciutto, tomato tasting tomatoes, blood red oranges and some biscotti for afterwards. Still hungry later on? Head upstairs to the large food court with offerings such as fried and grilled seafood, burgers, more T-bone steak, pasta, pizza, and so much more. Grab a beverage from one of the bars and happily feed your face while you people watch.

You can’t visit Italy and not eat gelato. There’s no shortage of gelatarias in Florence, full of mouth-watering mounds of gelato but why not go to the best and original? It’s worth seeking out for the pear and cameral, bacio, mango… well pretty much every flavour under the hot Tuscan sun.

Where have you eaten in Florence? Any recommendations?

During a recent trip to Europe, my partner and I played the game of ‘could I live here?’ While the thinking was a pie in the sky, we were asking it while doing things that the locals were doing.

Although we saw the sights, paid too much, lined up, and took selfies, we also took our cues from residents and took time to embrace the every day.

Here are some ways you can combine your ‘to do’ list with a bit of cultural immersion to get a feel for what really living there would be like.

Stay in an Airbnb

Staying in an Airbnb gives you the opportunity to discover neighbourhoods you would never visit if you confined yourself to a hotel in the city centre. Your host will provide you with great local tips on where to eat, shop and when to visit the sights. We would never have discovered a deliciously traditional French restaurant – and tripe sausage – if it wasn’t for our lovely host. 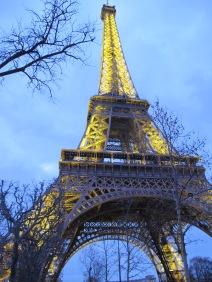 The Eiffel Tower was nice but so was the tripe sausage.

Take public transport or use your own two feet

There is no better way to understand the occupants of a new place than by people watching. Take the train to see what commuting would be like – just be reminded that trying to backpack your way through London on the underground at peak hour may elicit a few death stares if your Oyster card declines. Taking a bus gives you a different perspective, while walking is the best way to discover hidden alley ways, cute boutiques and street art.

Eating out is one of the great pleasures of travelling but you don’t have to do it for every meal. Buying groceries at the local supermarket can be a fun and educational experience, not to mention a much cheaper option. Visiting a fresh food market is a must if you can. Pick up some supplies to take on a picnic or use it to create your breakfasts in the morning. One of our best finds in Florence was the large undercover market with stalls filled to the brim with cheese, cured meats, biscotti, and juicy blood oranges – it was a tourist attraction in itself.

Do something you would back home

One of my favourite travel experiences was spending an hour or so at the laundromat in Bedford–Stuyvesant in Brooklyn. It provided the perfect opportunity to just sit and read my book, look out the window and listen to the chatter of locals going about their business. The same feel can be achieved by visiting a local library or bookstore, sitting in a park, going to the cinema, or attending a sports match. Attending a Canadian football league game in Toronto gave us an insight into a sport we didn’t know much about and ample time to people-watch.

Try to live a little bit like a local, and you’ll discover a whole lot more about the place you’re visiting.

How do you ‘live like a local’ while on holiday?

I don’t think I’ve ever visited a new place and instantly thought ‘Let’s move here and start a new life!”

But that’s exactly how I felt when I went to Byron Bay recently.

The first glimpse of the beach was a big energy-booster and a relaxant at the same time, while the backdrop of hills and lush farms added to its fairy-tale quality.

The decision to move started crystallising when we booked into our Airbnb – nestled in a still-quiet street a few doors down to the Tree House Café and only 15 minutes from Byron town.

A large bowel of macadamias and a cracker only served to increase my affection.

The beach of course is where it’s at in Byron. Sand as far as your eye can see to the left, the Cape Byron Lighthouse to the right.

A lovely place for a daily walk or swim.

Come Monday morning and the sandy stretches were dotted with people – young, old, unemployed, middle-aged and retirees. Were these people employed? What did they do?

Byron Bay has become synonymous with the entrepreneur life. Want to start a jewellery business? Move to Byron.

It’s easy to see why. I could easily imagine a life getting up in the morning and going for a run on the beach, having a breakfast of mango and macadamias and then heading on over to the study or maybe a collective studio to write.

Then, come afternoon, pop out during the arvo for a swim or a surf and then home for dinner and a drink on the balcony.

There is a feeling in Byron that start ups and freelances are supported. Cafes are full of people having business lunches or tapping away at their laptops.

The Byron and Beyond Networking Group host regular events such as ‘how to use local media to promote your business, and ‘goal setting for success’ or host talks by local success stories like Kieth Byrne of the Byron Bay Cookie Co.

Over the past five years there have been a steady number of businesses in town, hovering around the1500 mark but the unemployment rate is higher than the state average of 5.8%.

While the place has enough cafes to keep people fed and the tourist industry is obviously a steady source of income, the price of living an alternative, free-spirited life now comes at a price. 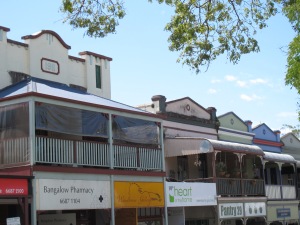 Even the town of Bangalow has had a surge in real estate prices.

Real estate has skyrocketed pushing people further out to the surrounding inland towns such as Bangalow, Federal and Mullumbimby.

And while traffic is bad on a normal day in Byron and the price of parking is astronomical for a small town, Schoolies and New Years would be a whole other level.

So while I was initially ready to pack my bags and embrace yoga on a daily basis, the practicalities of living in Byron did bring me back down to earth.

What place have you visited recently that you’ve wanted to move to?

Rach And Media
Not in Kansas Anymore

Brains, heart, courage... and a gorgeous pair of shoes