Melburnians were out in force on Friday for the public holiday they were given in order to prepare for the Australian Football League Grand Final.

No one would argue that it’s a pretty ridiculous reason to be given a public holiday, but judging by the number of people I encountered on my bike ride around the city, it was evident everyone was taking full advantage of it.

Predictably, industry and business groups were not happy with decision, warning of a ghost town and productivity loss.

But Premier Daniel Andrews defended his public holiday, highlighting the positive impact the time off would have on families. I tend to agree with his reasoning.

While small businesses and some industries may have suffered and lost money in paying staff penalty rates, can a cost be placed on people’s health? Shouldn’t we place importance on work/life balance as well as the economy?

I like to think of public holidays as large-scale giant mental health days. For those who can get a day off, it provides the time to do something you enjoy, to spend time with people you care about or to just do nothing.

Research conducted to coincide with Go Home on Time Day, found that the hours Australians work in overtime in a year adds up to almost $110 billion. Not paying their employees for this extra time is surely a benefit business is already reaping. 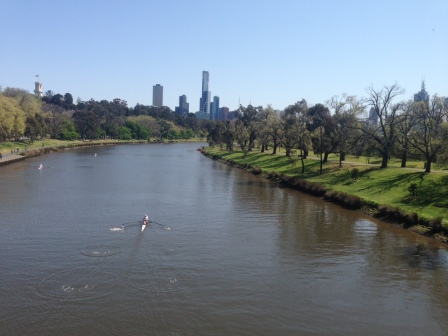 Melbourne was glorious for the public holiday on October 2.

The sunny weather obviously has an impact on the number of people being active on the public holiday; there were groups of cyclists, joggers and couples running together. Families and groups of friends were taking up real estate on any patch of lawn available for picnics and barbecues. Others left the city for the water, the highways to the coast and river much busier than they would have been otherwise.

Watching everyone enjoying this free day made me think of how important it is to be forced to not work. Despite our image to the contrary, Australians really don’t like not working.

We are a nation of workaholics. The latest Roy Morgan figures show Australia’s full-time workforce has about 21 of days of leave accrued.

So a few forced public holidays scattered throughout the year is, in my book, a public service.

What do you like to do on a public holiday?

Rach And Media
Not in Kansas Anymore

Brains, heart, courage... and a gorgeous pair of shoes